I love gadgets and spend an inordinate amount of time and money on them. Very few of these things, however, have altered my life on a day-to-day basis. Planetary Design's Double Shot French Press Mug, however, is one that has.

I'd passed by the Double Shot, sold at the Belfast Co-op where I do my shopping, many times before and never really gave it much attention before. It seemed just a little gimicky to me. But a few weekends ago friends Dustin and Hillary were visiting and Hillary just couldn't stop talking about how cool it was, so I gave it another look. Thanks, Hillary, for making me notice! 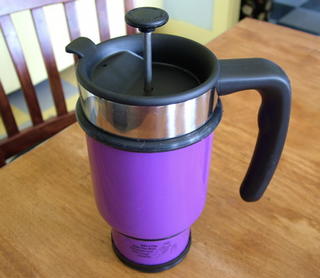 The idea is pretty simple. Take an insulated coffee mug and build in a French press, thus making it portable. Not a bad idea, really, since French presses tend to be made of glass, and are easily breakable. Planetary Design's Double Shot French Press Mug is more than this. It is a design masterpiece. Bodum gets the credit for making the best French presses in the world, but after having the Double Shot in my life for a couple weeks, I have to wonder if Bodum's more honest claim is just that they have the best marketing. My Bodum press has been sitting on the counter since I got the Double Shot, even when I'm not taking my coffee on the road. 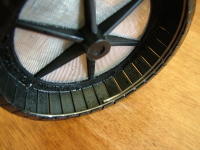 For starters, look at the heart of any French press, the plunger mechanism. It is a patented design, far superior to any I've seen. It has a plastic flange with a built-in spring to ensure that it is constantly pressed against the side of the mug. Some French presses just use a solid plastic disc. The Bodum uses the slightly better method of coiled spring to press the screen against the side of the carafe. The problem with these methods is that if the plunger tilts you wind up with coffee grounds in your drinking coffee. Planetary Designs provides the best seal I've ever seen, far more effective than Bodum's, and it is also very forgiving. No grounds even if the screen tilts. And yet it is a simpler mechanism. The screen just has one part as opposed to Bodum's three, making it much easier to clean. 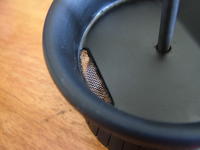 The lid is also well thought-out. It actually has a rubber O-ring that completely seals the lid to the mug. There's an additional screen where the coffee comes out. I'm not sure if it is the addition of this second screen, or if both screens use a finer mesh than Bodum and other French presses do, but the end result is that you can actually drink your coffee down to the last drop. Fans of French presses know that you have to avoid that last swallow of coffee in the cup. That's the one drawback to brewing coffee using a screen instead of a filter. You wind up with a certain amount of sediment at the bottom. It is a small price to pay, but even still it catches me off guard when I'm hurriedly quaffing my last bit of coffee before running out the door and wind up with a mouth full of grounds and powder. This isn't an issue with the Double Shot.

The Double-Shot is made with marine-grade stainless steel (whatever that means) and is insulated. Insulated mugs are something I tend to avoid for around-the-house use. They're fine for traveling, but (and of course this could just be my overactive imagination because stainless steel is supposed to be nonreactive, so there's no way this could be true... could there?) I find that even in stainless steel travel mugs the coffee tastes different to me. Not as good as it would taste in a ceramic mug. Maybe it is the "marine grade" stainless steel that makes a difference, but coffee in the Double-Shot tastes just as good as it does if I made it in my glass French press. Even better, since it doesn't have the sediment and the insulated cup keeps the coffee consistently hot, seemingly for hours, giving me time to savor the taste before the coffee goes cold.

I was initially resistant to the directions that came with the cup which said to add the cream to the coffee grounds BEFORE pouring in the hot water. Usually the cream is the thing that cools the coffee off enough to drink so you don't have to wait, so I worried that adding it before brewing would make the water too cool to brew a decent cup. The insulated mug, however, more than compensates for the cooling effect of the cream. 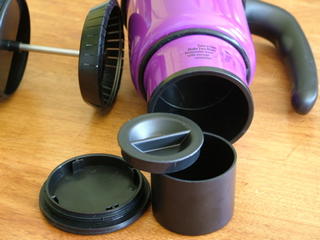 All this is cool enough to justify the price ($28 online from Liquid Planet, $22 at the Belfast Coop if I remember correctly. If you're a friend of mine let me know and I'll pick one up for you...) but the Double Shot still holds one feature that'll make you say, "Oh, that is SO COOL!" Pull off the bottom (sealed with another rubber O-ring) and inside that is an air-tight cannister that will hold enough ground coffee for two more cups (or secret documents or whatever other contraband you need to smuggle). You know, I've always hated those people who, at the coffee shop or restaurant say, "Can I just get a little hot water for this?" and pull out their own tea bag they brought from home. It's always seemed like a totally cheapskate thing to do. But with this massively cool hidden canister thing I may just be losing cool points this year.

So, there you have it. My latest "all-time favorite thing EVER!" I'm sure I'll have another one shortly. I usually do, but I'll be enjoying it with my Double Shot in hand.
Posted by Matt LeClair at 11:36 AM

This post convinced me. I'd been debating some different insulated travel presses, Bodum included, but decided this one's worth the extra few bucks.

Hooray! I'm so glad to hear it! It really is a great product. I found out that "marine grad steel" is actually the same kind of steel used in high-end espresso machines.

you have convinced me to get this press!! have been looking for a good one that wont cost an arm and a leg.... will b purchasing online in the next few min! lol... unless i can find it locally in NYC :)

Thanks!!
-Vanessa from Brooklyn

What a great sale! I just ordered a cornflower blue for us. My husband balked at the 2 I had in our shopping cart at Amazon, so I'm only getting one, but I know in my heart I'll be back for another one. Thanks for the great review. You should become an Amazon Associate and make a bit of a commission.